I’m a bit late but a year ago on November 3rd to be exact, I was in court for my divorce. I didn’t know it at the time but I was giving him quite the ass kicking. I wouldn’t find that out until a day before Thanksgiving. In many ways it seems like it was forever ago; in other ways I find it hard to believe it’s actually been a whole year. Of course, I haven’t been divorced a whole year. That anniversary comes next month.

On the anniversary of my court hearing I was with the mobster; we spent the weekend in Columbus. He seems to be with me on a lot of these days for which I am glad. It’s always nice to spend these milestone dates with him.

I had another eventful drive to my destination. Lots of construction. When I got off the toll road my exit was closed so I had to go the opposite way and then turn around. I wish that was the end of it. I was halfway down a road that takes me to a connecting highway when I came upon a Road Closed sign. I sat there with a stunned expression on my face for a moment before deciding I was heading east anyway and I had a GPS so what the hell? I turned left and let the GPS reroute me.

I finally arrived at my destination and he came out to help me take my bags in. He led me into a room lit by candlelight. He had a bottle of wine and a single diet Coke chilling on ice (the other five were in the mini fridge). He bought me chocolate covered caramel apples, cheesecake, and chocolate covered popcorn. He bought 2 coffee cups with pictures of Hocking Hills, a previous destination for us, on them. There was even a pack of Phase 10 cards. Then he led me over to the bed, telling me he had bought me slippers and he wanted me to take my shoes off, relax, and put the slippers on.

I followed along and was greeted with a pair of red and green sequined elf slippers with bells on the toes. I howled with laughter. He told me as he helped me put them on, “Now we’ll know where the other one is at all times!” Oh how I love this man!

The next day we enjoyed a free breakfast (waffles were included!) before taking off to find a Dunkin’ Donuts. The mobster is always complaining that it’s difficult to find a good one where he lives. We ended up pretty much on campus minutes before kickoff. It was a total zoo over there! Thank goodness he was driving because I wanted no part of that. It was kind of neat though because this was the same Dunkin’ Donuts we had gone to when we had our girls with us when he and T came up to watch Rock Star’s cheer competition. We enjoyed a vanilla chai and some hash browns, and watched the throngs of students as they walked to the field to watch the game. 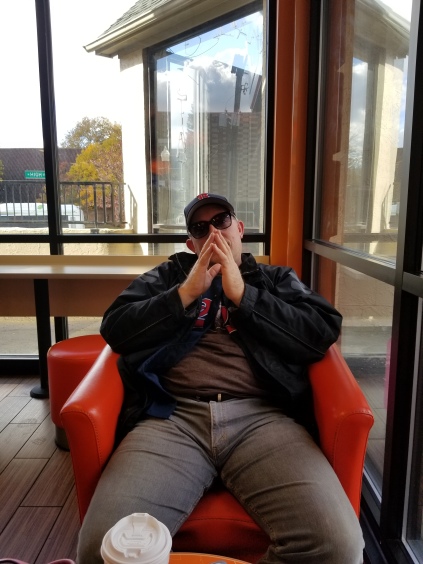 After we finally finished up there we headed over to yet another winery. This one is a sister winery of the one we visited in Lancaster. They, too, had wine slushies which I love! The other thing I really like about this one is that there are no set flights; you choose what you want to taste and it’s only a dollar per tasting. We ended up getting two different bottles to take home with us. One tastes like a giant sweet tart and the other is cranberry wine. Delicious! I’m bringing it out at Thanksgiving. 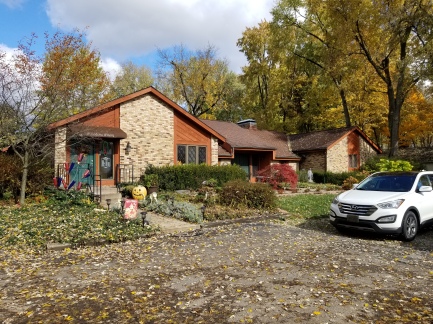 We ended up spending about 3 hours there. We sampled 6 wines each, plus I had a mug of the slushie. We had a bread board and a cheese and fruit board and ordered the trio sample of the wine cakes to go.

After the winery we took advantage of the Jacuzzi tub in our room. Did I forget to mention we had a huge Jacuzzi tub in our room? We did. It was fantastic. We probably spent more time in there than we should have but it was fun. We spent a lot of time talking about religion and the big bang theory and creationism and God. I know. Exactly what you would think people would talk about in a Jacuzzi, huh?

Later on we headed out for a late night dinner at The Cheesecake Factory. We didn’t get there until around 9 and there was still a line! Fortunately our wait was only about 10 minutes. We did take a short walk after dinner to let our meals digest before heading back to the hotel. I was so tired from the wine, the food, and the Jacuzzi that I was falling asleep on the ride back and I fell asleep with 10 minutes of getting back to the room.

On our final day we ended up checking out an area called German Village. It’s a quaint little area with brick lined streets and gorgeous older homes. They’re quite pricey judging by the open house flyers. We stopped and had lunch at a deli. Their sandwiches were HUGE! I had some sort of club and I could barely eat it. I ended up only devouring half of it and taking the other half back home with me. The mobster went with the reuben. It had an half pound of meat on it! We also tried the potato latke, the cherry kuegel, and the original knish. We decided the knish was kn-not, and the potato latke was not-ke. We really liked the cherry kuegel though. Who knew a cherry noodle concoction could be so tasty? 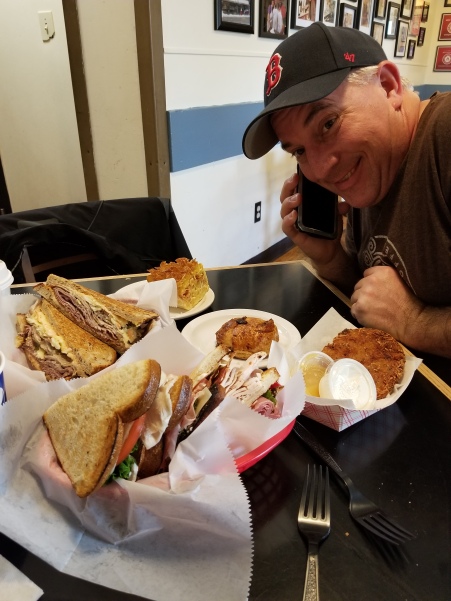 We walked a little bit more after lunch, almost went to an open house, and then finally said our good-byes. I hate leaving him but we both take comfort in the knowledge that our time apart is drawing to an end. 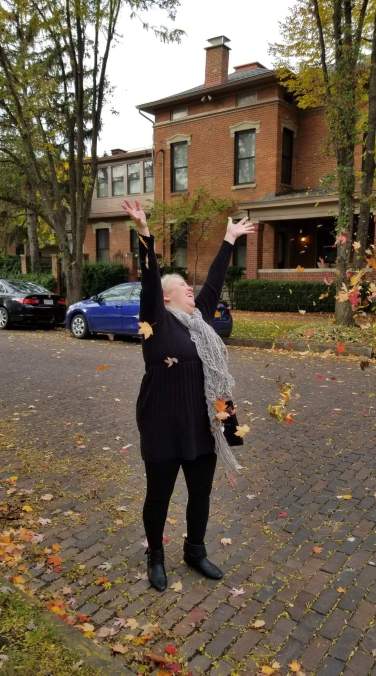 So, last year my Freedom Weekend was spent at the beach. This year it was spent in Ohio. Who knows what next year will bring? Personally, I hope we’re celebrating it in his new home with no goodbyes in sight.

P.S. Congratulations Boston on your World Series win! My man is a wicked Red Sox fan.