I’m back from a lovely weekend in Columbus with the mobster. We stayed at a gorgeous Air BnB in German Village.

Oh my! Where to begin? German Village is so quaint and amazing. We got in the car one time the entire weekend and that was to make a repeat visit to a winery that makes a fantastic cranberry wine (more on that in a bit). The rest of the time we spent walking the brick streets to our various destinations, checking out the various shops and restaurants, and admiring the homes that line the streets.

Our first night we went to Thurman’s Cafe for a late dinner. It’s been around since 1942 and is still a family owned establishment.

We walked in not quite knowing what we were getting into. The hostess stand is in a separate room with a Munsters pinball machine and an old school Ms. Pac-Man and Galaga arcade game. We were wondering if we were in the right place, or if maybe they were closed already. But once you walked through the doorway into the bar area it took on a life of it’s own.

It was crowded and busy, but not overwhelming. Music was pulsing, thanks to the iTunes jukebox in the waiting area. You can tell people love hanging out there.

Dollars bills cover the walls, the bar area, the booths. We did a bit of Googling and apparently they donate the money to charity. Where do the bills come from? Well, it’s their customer’s version of writing their name on the bathroom stall. Instead, they write them on the dollar bills; then they’re encased in packing tape and strategically placed all over the restaurant. 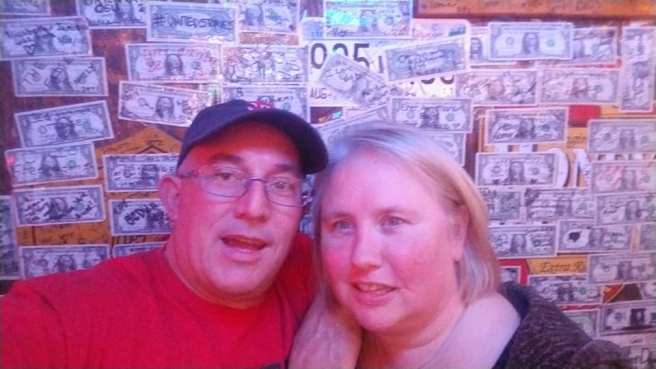 This place has been featured on Man Vs. Food and has burgers as big as your head! We started off with the fried pickles and then the mobster had the Jason burger. It’s a burger with: fried egg, bacon, Genoa salami, cole slaw, fries, tomato, mayo and mozzarella cheese. Wow! The toppings alone make a filling meal. I chose a regular ol’ mushroom and Swiss and it was delicious! The mobster’s burger came with a side of hand cut fries. Mine came with chips. We also enjoyed five Angry Orchards on tap between us.

They have a great concept. The servers don’t have set tables. Every person there takes care of each table and they all split the tips equally. We ended up with three different servers, including, I’m pretty sure, one of the owners.

It was a great spot and I’d love to go back. We had planned on stopping in on Saturday just for a drink but other plans ended up taking precedence.

I’m sorry to say those two Angry Orchards I had pretty much did me in. We walked the two or so blocks back to our Air BnB and I promptly fell asleep.

Saturday morning we were up fairly early. We decided to try another one of our host’s suggestions- German Village Coffee Shop. They bill themselves as home of the Western omelette and the breakfast sandwich. Our host described it as a cheap greasy spoon diner with great food.

It definitely had the greasy spoon atmosphere. It was packed; we waited, mostly outside, for a good 20 minutes or so. The servers told us this was actually a pretty tame morning compared to some.

We both had the breakfast sandwich. I took mine on toast; the mobster chose a bagel. He had oatmeal with blueberries as a side while I went with hash browns.

I’m not much of a fan of breakfast sandwiches. The mobster makes a fantastic one, but his is really the only one I like. I should have gone with the create-your-own-omelette. It was a decent sandwich; just not for me. The coffee was good and I really enjoyed the V-8.

No surprise- it was Pokemon Community Day. We were 3-4 blocks away from Schiller Park which was fantastic. It had a terrific ratio of Pokemon stops and Pokemon. We played for the full three hours. We caught a ton of Chimchars- the Pokemon for Community Day, and even did a raid.

The best part of the park was all the dogs! Being in the city and having small yards so many people bring their dogs to the park to walk, to play, to train. So. Many. Dogs. I was in heaven even if I didn’t get to interact with many of them.

They also had some amazing art work in the park. They had metal sculptures that were hung from wire. I wish we had taken pictures.

After our big Pokemon Community Day we made a car trip over to Wyandotte Winery. This is a winery tucked into the middle of a neighborhood. It is literally a house with a 4000 sq. ft. basement where the wine making magic happens. A portion of the house is dedicated as the tasting rooms while the rest remains the family home.

We had visited Wyandotte a little over a year ago. They have wine slushies, a great Catawba, and the most amazing cranberry wine that flies off the shelves. Sadly, they were still waiting to bottle this year’s batch because it was still fermenting. We were told they began bottling it the night before and it was fermenting in the bottles which meant the wine was bubbling and corks were popping before they called it quits. So, no cranberry wine for us. I’m very disappointed. Still.

We had a good time anyway. How can you go wrong with wine and a hearty meat and cheese tray, topped off with fruit and crackers?

I freely admit I like my wine sweet and fruity. We each tried four wines, including a chocolate infused red. I ended my tasting with a glass of the cran-apple wine slushie and the mobster had the warm mulled wine. 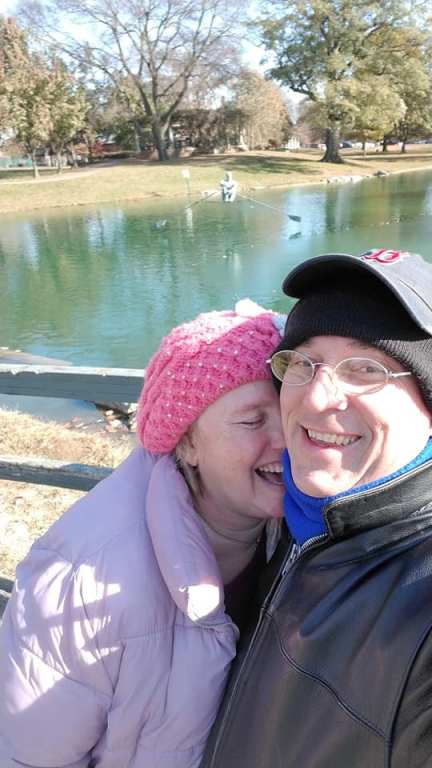 2 thoughts on “Back From Columbus, Part 1”