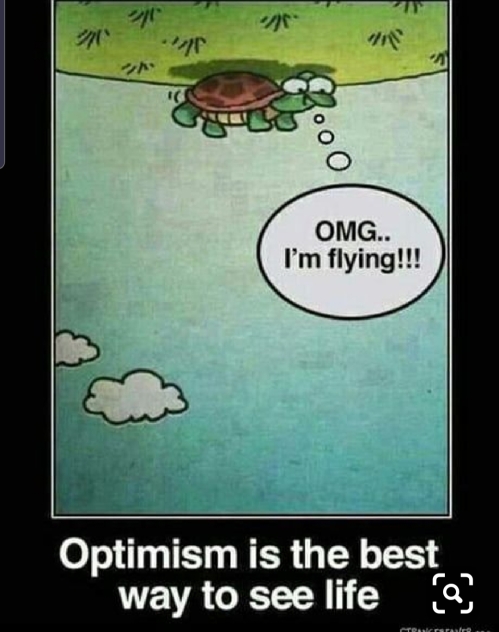 When I saw this meme I immediately thought, “That’s my mobster; it describes him perfectly.” He is the eternal optimist. As my daughter says, “He’s like the real life Elf.” She has also said he’s the happiest man she’s ever met, and that’s despite the fact he doesn’t get any vacation time. He could be laying flat on his back, completely stuck, but he’ll look up at the sky and exclaim, “Oh my God, I’m flying!”

He’s always able to look on the positive side of things. When I had to buy four new tires before I drove down to Virginia for my divorce hearing he told me, “The good news is you no longer have to put air in that front tire.”

He’s always got a smile on his face. He’s always happy. He’s up for anything and eager to try new things. He can talk to just about anybody, and he does.

He has his moments. In the very beginning he was still quite raw from his own discard. There were weepy moments. But for the most part, even then, he was happy. He made me laugh. He looked on the bright side. And I was right by his side, telling him he could do it and pushing him onward.

Even now there are times his STBX still tries to put him through the ringer- sending vicious texts, threatening to take half of everything, demanding he pay her credit card bills. Some days it gets him down and that smile leaves his face, that twinkle leaves his eye. He bounces right back, though. Soon he’s casting her aside and finding yet another way to make his world right.

It’s so nice being with someone who is happy and who looks for the silver lining, instead of being with a person who is always miserable and sees disaster at every turn. I hope I can one day be as optimistic as him.

2 thoughts on “Optimism and the Mobster”